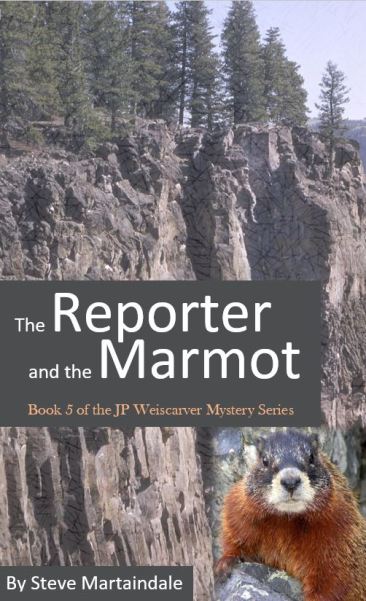 Things are really coming together for reporter JP Weiscarver this summer. With a small inheritance, he’s making plans for more of the travel he loves and he updated his transportation. He met an interesting woman in the process.

But then, just as he’s about to leave on an exciting trip, co-worker and best friend Jennifer O’Hanlon drops an emotional bomb on him and he’s left confronting the possible shortcomings of his personal relationships.

Meanwhile, his reporter’s nose begins to itch with events surrounding him during his visit to Yellowstone National Park. Nobody else seems to be suspicious about a recent death, but his instincts send him over the cliff, which is also where his own life seems to be headed.

I enjoyed this book even more than the previous four. Steve has a knack for getting the readers’ interest and keeping him guessing all throughout the book. I didn’t want to put it down and finished it very quickly. I also liked the different format in that the mystery wasn’t in the murder but the reporter’s thoughts. I will be waiting expectantly for the next book of which Steve gave a brief preview at the conclusion of The Reporter and the Marmot. Keep writing for your fans!

— by PMW on Amazon