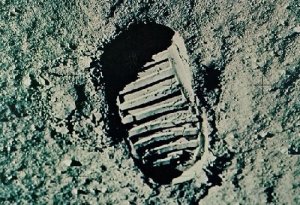 Sometimes the entries are vivid memories, both good and bad, and often they are surprising tidbits or good old-fashioned “Hmm” notes. Today’s is particularly special to me and concealed behind it are two other little jewels. First, in its customary abbreviated form, here’s what you found on my social media pages:

I started school and was captivated by space exploration. On Tuesday, Feb. 20, 1962, our first-grade class listened over the school’s PA system to a radio broadcast of John Glenn’s feat as the first American to orbit the planet.

We were well on our way, as a nation, toward answering President John F. Kennedy’s challenge of the previous May 25 that we achieve “the goal, before this decade is out, of landing a man on the moon and returning him safely to Earth.”

In an age when computations were done on paper with the aid of a slide rule, we bulled our way through the research and the challenges, such as the Jan. 27, 1967, launch pad fire that killed three astronauts.

In December 1968, Apollo 8 took three astronauts around the moon and back as we broadened our knowledge and tested our capabilities.

Finally, on July 16, 1969, Apollo 11 lifted off from Kennedy Space Center with astronauts Neil Armstrong, Edwin Aldrin Jr. and Michael Collins. We then waited more than four days before hearing those first words from the moon: “The Eagle has landed.”

My dad owned a small grocery store in the Greggton community of Longview, Texas, and it was my turn that summer night to close the store with him. We had a small black-and-white television sitting on top of the meat counter, its rabbit-ear antennas pulling in the best image it could of Walter Cronkite’s coverage of the event as we waited for the highly anticipated moon walk.

I do not recall us having a single customer in the late hours of the store, which closed at 11 p.m. Central.

At 9:56 p.m., we heard Armstrong’s famous line, “That’s one small step for man, one giant leap for mankind,” as he descended the ladder to the gray, powdery surface and took a step on the moon!”

I watched Cronkite weep; I may have joined him.

We were late going home that night. The moon walk continued until after midnight, though I’m not sure if we watched all of it. I do remember the drive to our home in the country, my head sticking out of the open window of my dad’s old pickup, looking up at the moon.

It was waxing and right about the first quarter phase. I stared at it most of the way home, thinking, “There are people up there right now.”

Add one other item to my description of the 1960s: Exploration.

I promised two other little jewels from July 20, one older and one slightly newer.

On July 20, 1919, Edmund Hillary was born in Auckland, New Zealand. A first-rate explorer, Hillary became the first human, along with Nepalese Sherpa Tenzing Norgay, to reach the peak of Mount Everest, the tallest mountain on Earth (and may I say, the spot nearest the moon).

On July 20, 1976, the Viking 1 lander, an unmanned U.S. planetary probe, became the first spacecraft to successfully land on the surface of Mars.

One thought on “A day for explorers”