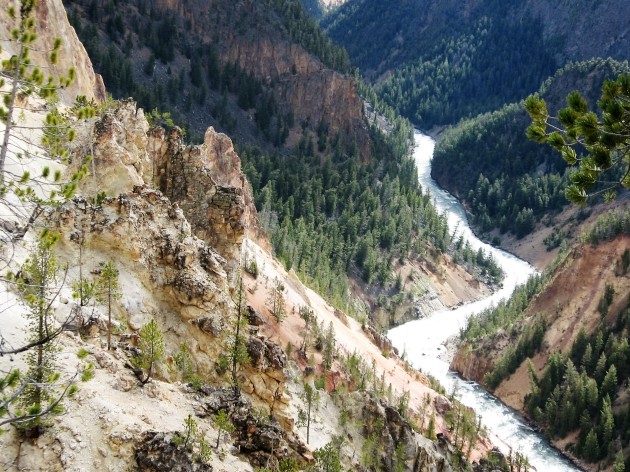 Grand Canyon of the Yellowstone, which figures prominently in “The Reporter and the Marmot.”

I owe an apology to JP fans who have been patiently awaiting the publication of “The Reporter and the Marmot,” so here it is.

I’m sorry for the roller-coaster we’ve been through as a result of my failed attempt to get the book into a special Kindle program. However, there is some good news. The program’s high standards pushed me to rework and fine tune “Marmot” until it became, in my opinion, the best written book of the series.

But then, as you remember, the rejection came literally hours before Leah and I started on our five-week hike down the Erie Canal and I simply filed the book on a mental shelf. I mentioned in a blog post at the time that I intended to rewrite parts of the book and allow the series to end. I’ve accepted that as the logical outcome for most of this time and have now decided …

You see, I enjoy JP and the gang. I get a kick out of hearing from readers. And who knows … maybe someday … we’ll hit on a broader audience. If not, well … you folks are plenty good enough.

Thanks for everything. Oh, and be prepared to hop on board as soon as the book is released. If I can make it work out, I plan to open sales of the digital book at a very low price for a short time to give a break to all the folks who did not get a chance to get it free through the Kindle program.

5 responses to “Moving on”