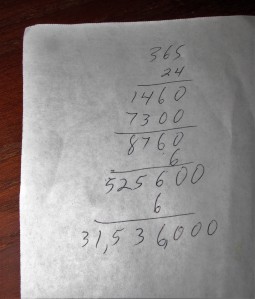 Pick something that’s a commonly accepted part of everyday life today that did not exist at some point in your memory.

Got it? An easy one would be the Internet. Even my daughter can claim that. Personal computers go back a little further. Refinements in medicine. Communication. You get the idea.

Right this moment, if someone asked you, “How many seconds are there in a year?” you would do what?

Your answer is about 3.15. You count the decimal places you dropped – five – plus the two you picked up in the calculation and answer, confidently, “About 3.15 times 10 to the seventh power.” Quicker but less accurate.

Or, what about this?

“Siri, how many seconds are in a year?”

Those younger than the age of 40 … maybe even 50 … might have a difficult time envisioning life without handheld calculators, but we functioned. (Get it? A math joke.)

And, yes, I’m willing to pull out the ultimate old fogey line: “We were able to put men on the moon without them.”

Not that I in any way want to go back to those days. Nor do I lament that children are being robbed of an education because they do not learn how to use a slide rule or, even, because they might have a difficult time performing the calculations on paper.

No, I’m more anxious about seeing what becomes outdated next because of yet another discovery.