I read and hear it quite a bit, someone espousing hatred for Donald Trump.

I cannot hate Trump, flawed as he may be, because that helps nobody. It does nothing to alleviate suffering caused by his policies, it fails to improve international relations, it does not move us any nearer healing the planet.

Hatred doesn’t even affect him, at least not in any way beneficial. Granted, video from the World Series game where he was roundly booed by the crowd appeared as though he may have been hurt, but don’t expect that to change anything. This is not a holiday movie.

(As a side note, I have no problem with booing the president. It’s the only way most of us can vocally express an opinion of a celebrity or a politician, the opposite of cheering.)

The only person affected by hate is the one harboring it. Resisters have more to accomplish after last year’s ringing endorsement of Democrats in the congressional elections. Losing mojo by concentrating on hatred hurts us and our message.

So, I’m settling in on a one-year mission to do what I can to encourage new voters to get involved in the 2020 elections, to help us all by voting out Trump and the Republican Party that has failed to protect us from an aspiring dictator.

Instead of hating, body shaming, making fun of hair or bottled tans … whatever … there are plenty of genuine nation-killing problems on which to focus. 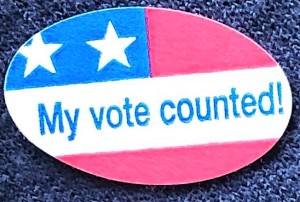 Check and make sure you’re registered to vote (some states have been dropping thousands off voter rolls) and study up on what’s happening.

Finally, one last-minute reminder. Some areas have elections tomorrow, Tuesday, Nov. 5. If that applies to you and you haven’t voted, do your homework and be there in the morning.

2 thoughts on “I do not hate Donald Trump”