As our flight approached the Thai mainland, we looked out of the airplane windows and spotted numerous small islands. I knew from photos I had seen that such islands were frequent around Ao Nang.

Soon, we thought they were called karsts, but eventually figured out karst was a type of landscape formed by the dissolution of soluble rocks. In the case of these islands, it was limestone that was dissolved by the water, leaving sometimes strange-looking formations.

This much-photographed karst island rises above Phang Nga Bay just across the Andaman Sea west of Ao Nang. Called Ko Tapu (spike), it is better known to tourists as James Bond Island for its appearance in “The Man with the Golden Gun.” 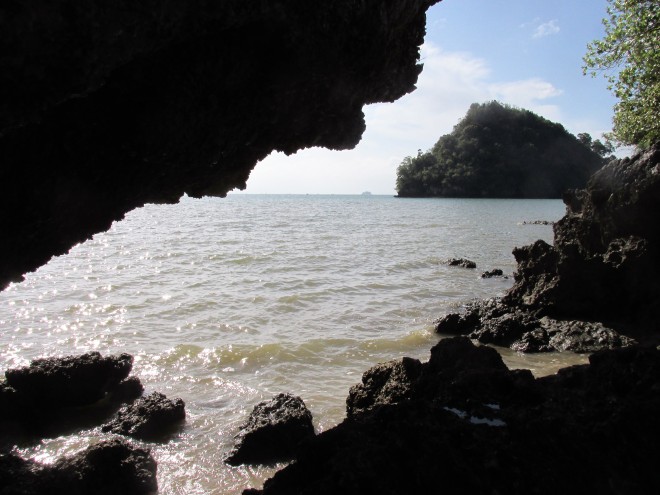 Actually, exploring these islands proved a somewhat formidable task. Remember our walk on our first morning (Section 4) that took us to a karst formation on a small peninsula that became an island as the tide rose?

We simply got to the edge of it and found climbing into and onto it more challenging than we wanted.

And, of course, the fact most of them are sitting out in the bay makes them more difficult to access.

However, our kayaking trip (Section 14) gave us a chance to paddle quite a distance into the canyon of a karst formation.

Proceed to 8. Royalty and government