Colorful and distinctive long-tail boats packed into the harbor at Nopparat-Thara Pier in Ao Nang, Thailand. (c) 2017 by Steve Martaindale

Those are the words I heard most during our visit to Thailand. (Something like “saw-WAH-dee caw,” the last syllable drawn out and almost melodious. Males, by the way, say, “Sawatdi khrap,” the last word sounding more like “crop” with a soft “r.”)

It’s the traditional greeting and we heard it from many storefronts and street vendors while walking around the town of Ao Nang, located in Krabi Province on the Andaman Sea in the southern extremes of Thailand.

My hope is this page and the others to which it is linked will give you a good feel for what we experienced during our January 2017 visit.

It is not a travel guide or a comprehensive introduction to another country or culture. Rather, it is specific to our experiences in this certain area during an explicit time period.

That, by the way, is exactly what we wanted. We left after 16 days feeling as if we really experienced a different place, culture and, in many ways, a shift in time.

If you visit Bangkok or Chiang Mai, for example, your experiences – including food, customs and even language – can be much different. In fact, your trip might not resemble ours too much even if you stay in Ao Nang but rent a hotel room and rely on guides to see the area.

First, a commercial interruption. These pages come with the support of folks who have and do provide financial and other tangible assistance. If you would like to join these fans, click on the photo for more information. Here, pictured amid Thai starfish, are our contributors for this project. Thank you all.

Here’s how this page works. Following are introductory comments and photos for several topics. Each headline and photo will link to a separate page with more photos and information. Like that, you don’t have to load everything at one time and I hope it makes reviewing it all easier. You will be able to click to the next section without returning here or you can come back to pick what to look at next. Let me know in the comments if you like or dislike the format as I may use it with other Expeditions.

Our last night. From the left, Thomas, Steve, James, Catherine, Leah and Tukata.

How did we get here? We didn’t just toss a dart at a world map and decide to visit Thailand.

In fact, it was only because we had good friends invite us that we decided to head out to a rather remote corner on the other side of the globe. And, believe me, that made all the difference.

Did I say good friends? Even that is a story. 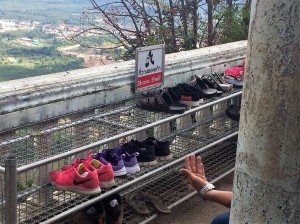 Some 93 percent of Thailand’s citizens are Buddhists and I felt we saw a reflection of that in the generally calm conduct and gentle demeanor of the people we encountered during our stay.

However, we were guests in their country, so we wanted to be as gracious as possible and that included, among other things, shedding our shoes a lot.

Anytime one travels into unfamiliar territory, there is a naturally heightened concern for safety. It’s understandable to be wary of the unknown.

In our experience, the only time we felt a need to be particularly vigilant was while walking along the roadsides. We will discuss in Section 5 how crazy the traffic seemed to us.

Our desire was to not have the normal tourist experience and we were highly successful in that regard.

Cat and James rent a house on a dead-end street just a block off a fairly large local road that put us within easy walking distance of convenience stores and eating spots. A longer walk takes you to town.

In no time, we knew our way around and loved the freedom to come and go.

The first thing to say about transportation concerns the driving.

My first Asian visit, almost 14 years ago, was to Indonesia. Upon arrival, a friend commented on the traffic: “Lines on the road are merely suggestions,” he quipped.

Consider the photo above. This is a two-way road with only a narrow shoulder on the left side (one drives on the left in Thailand). Taking up half of our lane is a pickup that was just parked in the road. Believe me, that’s not unusual.

Passing it is the larger pickup, which had to pull into the oncoming lane, but that’s normal considering the situation. Simultaneously, a scooter is passing on the pickup’s right.

This, believe it or not, is much more sane than most of the traffic, but I couldn’t get a photo to represent it well enough. 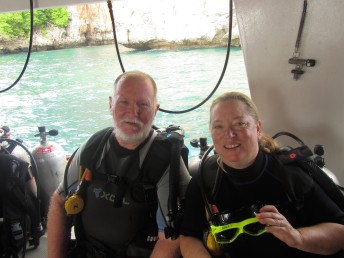 One of the great tourist attractions for this area is its scuba diving and, since our friends work as instructors, it seemed a shame to not experience our first dive.

Suffice it to say we came away with vivid but entirely different memories.

Karst landscape is formed by the dissolution of soluble rocks, such as limestone, and centuries of that has resulted in interesting islands just off the Krabi coast.

One of the popular tourist spots a ways from here is Ko Tapu, a small karst island better known to tourists as James Bond Island for its appearance in “The Man with the Golden Gun.”

Even the islands without Hollywood credentials sit just off the coast, obvious breaks in the routine, inviting exploration. 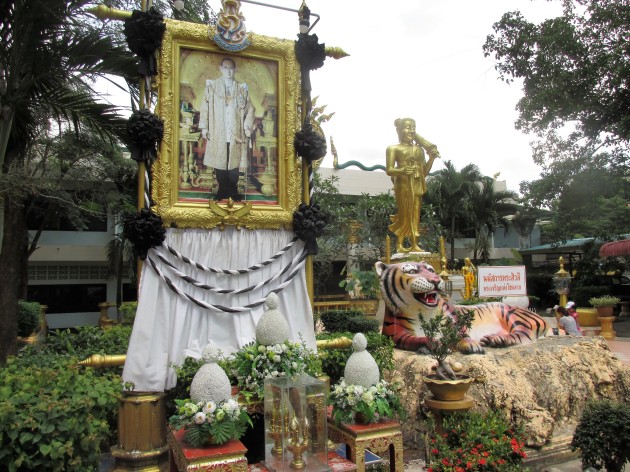 Being in a tourist area was possibly a good thing.

Thailand has had some leadership issues – such as a military coup in 2014. A military junta still rules the country, but they don’t mess much with tourist areas for fear of jeopardizing an important aspect of the economy.

Regardless, the monarchy in the country enjoys tremendous popularity, even with the death of Bhumibol Adulyadej last October and the ascension of his son, Maha Vajiralongkorn Bodindradebayavarangkun. 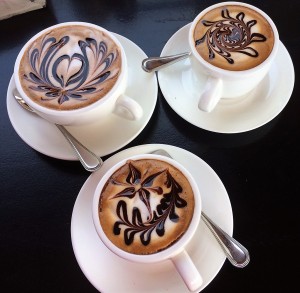 More of our friends have asked about food than anything else.

In the States, we haven’t eaten but maybe once or twice at a Thai restaurant, but it’s our estimation, based in large part on what others say, that the local food we had is not the same as what you find in an American Thai eatery.

A bit of a surprise was the amount of food that was grilled or fried. Also notable was what they ate. 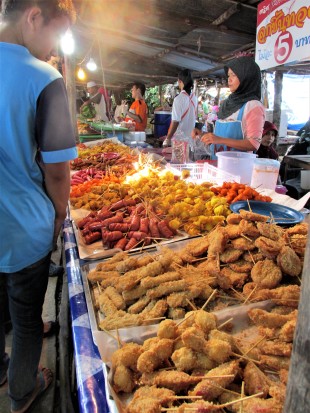 It seems we were always in front of a business of some sort.

In the neighborhood where we stayed, there were shops set up in front of people’s houses. Or they lived above the store and there was a good chance they rented out a room, too.

Within easy walking distance to the north and east were two daily markets (each held on a particular day of the week), traditional stores and even a rather impressive office supply.

Heading south, after passing through a brief undeveloped strip, we would find a bunch of shops prior to reaching the harbor. These seemed to cater to both locals and tourists. The area is considered to be the more local beach, but tourists depart for many waterborne activities from here.

Turning toward town, we would be among touristy stores in less than a mile. For a couple of miles, at least one side of the street would be packed with businesses – plenty of restaurants, massage parlors and souvenir shops.

And, somewhat oddly, it seemed to me, a large number of shops selling tailored suits.

Visiting Tiger Cave Temple is enjoyable enough simply as a tourist stop. If you’re at all able, physically, seriously consider making the 1,237-step (or so) climb to visit the mountaintop Buddha pictured here.

One of the most enjoyable aspects of it was visiting with fellow climbers from around the world – ascending and descending – during oxygen breaks.

But what made it far more than a spectacle for us was seeing it with Tukata. As a Buddhist, she seemed captivated by everything.

Did I mention we visited twice?

Kho Lanta was a bonus opportunity for us. It’s an island a bit down the coast, the highlight for us being Mu Kho Lanta National Park.

In addition to a rain forest walk, we encountered dozens of monkeys, watched butterflies and ants, saw some interesting trees, visited an old town and, of course, ate.

One thing traveling demonstrates is how prevalent the English language has become.

It makes sense, I guess, since people of English-speaking countries travel a lot and they’re not good at learning second languages … me included. I have tried, but my brain simply is not wired to adapting easily to different tongues.

Having accepted that, and recognizing that Thai is radically different from English and the wee bit of Spanish I’ve picked up, I really didn’t try much on this trip. The “sawatdi khrap” greeting and thank you, “kob kun khrap,” were as adventuresome as I got, linguistically.

We took a break from walking one day and put our upper bodies to work propelling a kayak around Ao Thalane Bay.

As a side note, the day began with us sharing the back of a pickup with a couple from San Francisco, a mom and teen son from Peru, and a couple and their precious daughter from China.

Times like that rank high among our reasons to travel. 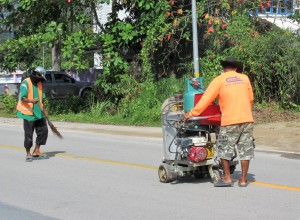 Work is important to any society, and we got a definite impression the Thai people in our area keep themselves busy.

As I said in Section 10, “Market / shopping,” there are so many little shops and street vendors. Often, a vendor offers a narrow selection, maybe nothing but fruit shakes, but they show up for what appears to be a small number of customers.

And then there are the people we saw who were literally sweeping leaves off the beach. 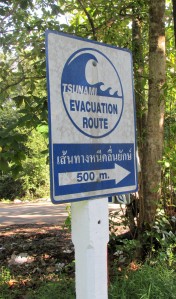 I couldn’t help but feel the people of this beachside area of Krabi Province are willing to forget the great Sumatra–Andaman earthquake and tsunami that occurred Dec. 26, 2004, resulting in one of the greatest natural disasters in history.

In Krabi, there were 476 confirmed deaths and another 890 missing. While that’s a small percentage of the almost quarter-million people who died, it’s still a large amount for a small population. 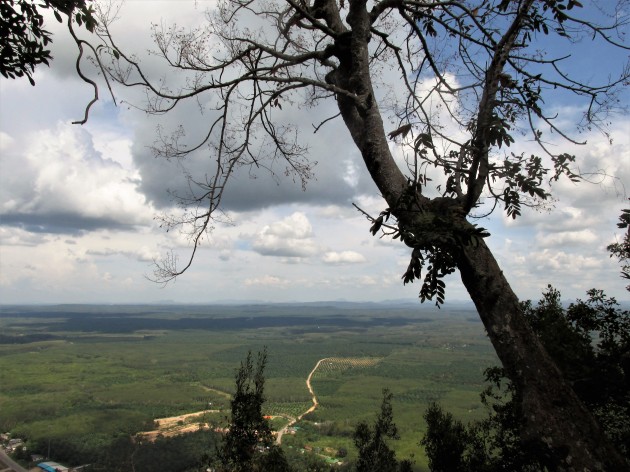 Can I use American money? What’s the weather like? Are rest rooms a concern? What should I wear?

We’ll answer these and more questions while tossing in our experiences. Here’s the first answer.

Q: Should I visit?

Our parting thoughts, examining the highlights and the greatest impressions made upon us.

Proceed to 1. Our friends