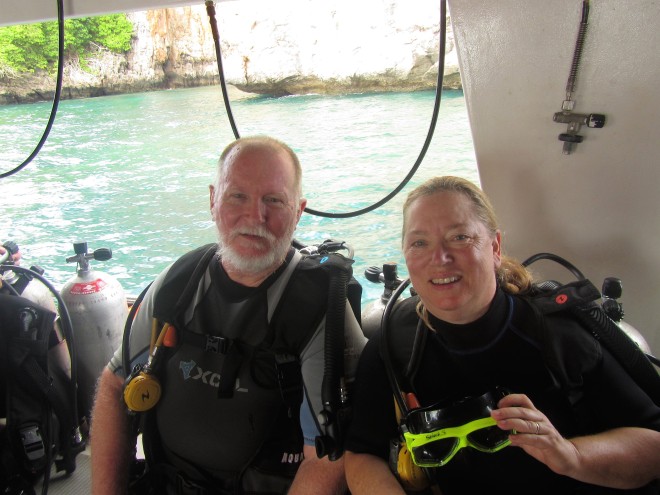 Our friends are both scuba instructors at Aqua Vision, one of the top-rated dive shops among many in Ao Nang, an area noted for excellent diving.

Neither of us had ever seriously considered diving, even though a large number of my friends have done so, some professionally. As for me, I’ve never been much of a water creature, ever since I barely survived swimming lessons in the second grade. Leah, on the other hand, has always loved the water, even though she doesn’t swim too often any more.

Both of us, however, were fired up about the opportunity to swim with the fishes. In my mind, it’s perfect for me since I can carry my air supply and not have to worry about drowning.

We put off our dives until late in our visit, waiting for the promise of good weather. After we scheduled it, we were required to make a visit to a local physician to get his approval, since we were on prescription medications. 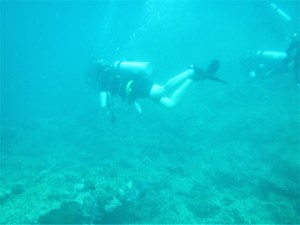 The visit with the doctor was an experience in itself. There were several people in the waiting room when we arrived, but they moved in and out quickly and we found ourselves sitting in the doctor’s office soon enough.

We told him what drugs we were on and he promptly dismissed them as a concern. A joy to visit with, he also gave some advice about dealing with the feeling of having something in your ear after diving. He signed our forms and released us to dive. The cost for each of us was either 200 or 300 baht, we don’t remember which, less than $6-9 U.S.

Back to the dive shop to try on wetsuits and masks. They even had a mask with a corrective lens that made everything look much sharper for me since I couldn’t wear my glasses underwater. We were ready to go.

James and Cat decided beforehand it would be best if neither of them was our instructor, which made sense to me. Instead, they lined us up with Sergey, a burly Ukrainian who they indicated could probably toss us out of the water and into the boat if it became necessary. (That is a joke, you understand. I think.)

They call it Try-A-Dive, not an instructional session, per se, but just a chance to get your feet wet, so to speak, and decide if you’d like to pursue earning diving certification.

But the most exciting thing on our way out was unplanned.

The boat was cruising along maybe halfway out when it was abruptly throttled back and there was yelling. Most of us were on the top deck and everyone moved to the starboard side and, let me tell you, those divers went a little crazy.

Hovering just below the water line was a large fish with rows of yellow spots, one the divers all recognized as a whale shark.

We had heard our hosts speak of whale sharks and their desire to find one. While it is a shark, it’s also a filter feeder, like a whale, and is not a threat to humans. It is also the largest fish known to be alive today. Adults grow, on average, to more than 31 feet long and weigh 20,000 pounds.

Our shark was huge, by human standards, but I heard it was probably young and not nearly full grown.

We must have spent 20 minutes idling next to the slow-moving fish. I shot numerous photos, hoping to catch a moment when it broke water. The best I got was this one. If you look in the lower center, you can see at least three rows of the yellow spots.

In all, the boat ride out to the dive site took a while, maybe a couple of hours, giving us time to visit a bit with some of the other divers, including a woman older than us who had more than 500 dives in her log book.

As we got closer, Sergey gave us instructions about how to get into the water (“Don’t jump. Just stand on the edge of the platform and take a big step overboard.”) and how to clear water out of a mask. Pretty much everything else, he would take care of.

Everything happened quickly once we got to our spot and people began dropping into the water. Sergey helped us get suited up, led us to the diving platform and he stepped in. I went next, followed by Leah, and our instructor took one of us in each hand, holding onto some part of our equipment.

Remember how I described our swimming expertise – Leah and me? Leah is half fish. I, on the other hand, don’t hardly float, much less swim.

Strangely, though, it was Leah who was more concerned about the experience. She wasn’t certain about breathing through her mouth instead of through her nose. I, on the other hand, had all kinds of confidence that this would finally give me the opportunity to fully enjoy being in the water.

And then the tables turned.

Sergey took time to get us organized and make sure everything was working correctly. Leah quickly picked up on breathing and she was ready to go. I don’t really remember just what happened to me.

I got some water in my mask, which I cleared as instructed. I was breathing – heavily – through my mouthpiece. I was kicking those huge fins to stay afloat.

And my mind was exploding.

Every brain cell knew good and well that I was safe, but they were not governing my reaction. A fear unlike any I’ve felt since I don’t know when welled up and took charge.

Sergey asked if we were OK, Leah chirped up that we were and I turned to look him in the eyes and say, “No, I am not OK.” It took only a minute for me to figure out I was not ready to do this, especially when it appeared the boat was about to pull away.

I had heard from my friends that these things happen, so I knew he wasn’t shocked. I also noticed he didn’t try to talk me into staying. Best I remember, I was pretty adamant about it.

Later, I told Leah that if she wants to get into scuba diving that I’m game to give it another try. I believe if I start in a pool where I can stand up, where I can calmly go underwater until I gain confidence in the equipment and my ability to function in it … maybe I could take the big step again. I would love to, because it must be wonderful. 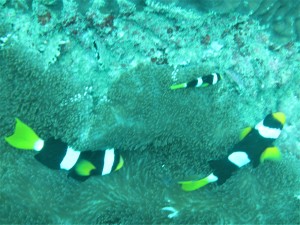 “I nearly backed out of going when I tried the breathing apparatus on land, but after a few minutes it was all good. The next hurdle for me was when I was actually strapped in, tanks and all.

“It was so heavy I could barely stand up, much less walk to the back of the boat! But I made it – until I had to jump into the water. I panicked. It was so heavy and they wanted me to hold my mask on with one hand and the weight belt with the other. My little T. rex arms would barely reach across all the equipment.

“Steve and the dive master were already in the water, so ungracefully I jumped. And then it was magnificent! 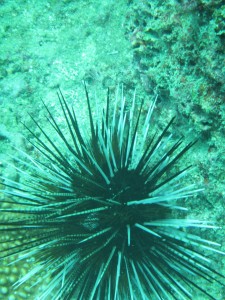 “The water was a perfect temperature and clean! The dive master asked us to put our faces in the water and WOW what a view even from the surface!! It was all I could do to keep from wriggling away and down under the water.

“However, there was the whole matter of weights and buoyancy controls and settling Steve. Very soon, we were off with Sergey gripping my dive gear to make all the adjustments and keep me from getting lost.

“I had no idea there was so much beauty right under the surface of the sea. Amazingly, the sea life doesn’t run (technically, swim) away like deer, elk, foxes and birds do. All the fishes and creatures just swam around us like we were one of them. 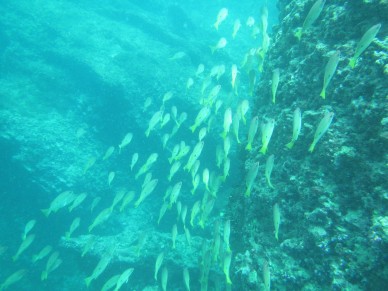 “Once, a huge school of fish surrounded us, swirled, then kept on swimming. We saw a highly venomous sea snake, which was brilliantly colored, but it just kept pursuing its next meal. I had no idea there were blue starfish! I took pictures like crazy with a loaner underwater camera, but all the vivid colors just don’t show up as well in a photo from a cheap camera. It felt like I was swimming in a giant aquarium like you see at Sea World.

“Sergey doesn’t realize how lucky he was that I couldn’t talk underwater because I would have had a million comments and questions.

“A reef shark passed us by, but he wasn’t interested in us for dinner, thank goodness. I didn’t feel a moment of terror; I have seen ‘Jaws’ a lot of times. It helped that Sergey was totally calm and unworried – and had a tight grip.

“The hour passed so fast. We were out of the water for a lunch break and then back again. This time I had no hesitation jumping in the water again and we explored the world beneath the waves.

“It was a shallower area so I got a closer look at the bottom and huge rocks and crevices and all types of coral. It was like one of those National Geographic explorer videos where you see the sea creatures dart in and out of the crevices or hide camouflaged until their prey passes by. I’m pretty sure we saw Dory and Nemo.

“The entire experience is one that wasn’t even on my bucket list because I had no idea that it could be so incredible. But since the opportunity fell into our laps, I’m glad I did it!

“Do I need to go again and again? No. Fabulous experience. But if I went again, I might really be hooked and it’s an expensive hobby. But I might try snorkeling.”