I must say, after considerable time riding with friends and local transport, after walking many miles along the public streets, I came to feel there were redeeming factors to the perceived madness of traffic in Thailand.

For example, scooters and motorcycles – which easily outnumber four-wheeled vehicles – will pass on the shoulder. And, if possible, they will stay on the shoulder, which makes it easy for pickups to pass them.

And they don’t seem to get angry about it.

As I said in Section 2, being confrontational is negative in the Thai culture; one is expected to retain his or her composure. That is exhibited so well on the roadways.

In some parts of the United States, one expects to hear horns honking all the time, in anger. In our area of Thailand (it might be different in the cities), I heard a lot of honking horns but for distinct reasons.

Most commonly, a beep of the horn meant, “Look out, I’m passing you.”

The other I noticed while we were walking. There would be a beep and I’d look over to see someone driving a tuk-tuk and motioning in a manner to ask if we wanted a ride.

Putt-putt on the tuk-tuk

We first came across the term tuk-tuk in South Africa as a smallish three-wheeled vehicle offering free transport to and from its sponsoring grocery store.

In Thailand, we found what is reputedly the home of tuk-tuks. And they are everywhere. Not only that, but the configurations of the vehicles are outnumbered only by the manners in which they are used.

First, allow me to beg a bit of indulgence. For this outsider, the terms used for these and other vehicles seemed both evasive and all-encompassing. For example, tuk-tuks are not just three-wheeled but the name seems to be used generically for taxis, including small pickups.

The name, tuk-tuk, supposedly came from the sound made by original diesel engines. I have since read that many are powered by LPG now, but that’s not something I checked out.

Other terms – not necessary for a visitor to understand – include samlor for the ubiquitous three-wheeled contraptions and Song Taow for pickups or three-wheelers that contain two bench seats in the back.

Samlors are amazing. They serve as a combination family station wagon and utility pickup truck. We saw folks carrying unimaginable quantities, shapes and sizes of products on them. The number of people to fit on one seemed unlimited.

One reader asked about the ease of transportation. It’s not much of a stretch to say there’s always someone to sell you a ride. This might be particularly true in Ao Nang since it’s a semi-remote tourist area.

We were advised that if we wanted to pick up a ride (that is to say, not something pre-arranged such as through an outfitter) that we should do so only with a driver wearing an orange vest. Presumably, they are government sanctioned to some degree.

Late in our stay, we finally did pick a ride back home from near downtown. Being ardent walkers, Leah and I never minded footing it around town because it gave us a better chance to see and interact with what’s going on. However, riding a tuk-tuk seemed like something we simply had to do.

We approached a stand of tuk-tuks and a young woman asked if we wanted a ride. I produced photos from my phone to show her the street sign for our street and another with the sign of the hotel at the intersection. Neither seemed familiar to her or the other drivers. (In their defense, the hotel had just opened.)

She got on her phone to ask someone where it was and I finally got across to her that I could give directions and, with that, we were on our way. The reason I tried to get her to understand where we were going was to arrange a price beforehand.

Once we arrived, she quoted a price of 200 baht (less than six dollars). I was later told that was too much, but it was worth it for us.

While I soon felt that the organized disorganization that was traffic in Thailand was indeed safe enough, there was one thing I never could come to grips with.

That was vehicles on the road at night without lights, especially tail lights. 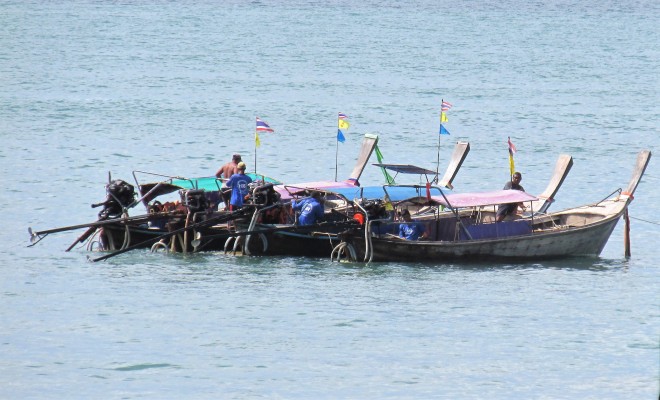 One of Thailand’s more distinctive modes of transportation is the Ruea Hang Yao, known as the long-tail boat.

Distinguishing characteristics of long-tail boats include an automotive engine for power and a propeller mounted on an extended driveshaft that protrudes from the back of the boat, giving the craft its name.

The engine is mounted on a pole inside the vessel and that pole is swiveled from side to side to effect steering. The pole also goes up and down, allowing the propeller to be removed from the water.

When we went scuba diving, we had to take a long-tail boat between the shore and the large dive boat, which was not able to get into the harbor.

We all sat underneath a canopy while the operator stood at the rear of the boat and watched where he was going by peering over the roof. He kept one hand on a steering wheel, which I supposed controlled a tiller, and the other on the pole with the engine and propeller.

Most of the boats, of all kinds, had colorful ribbons or cloths tied around the prow. I was told they held a cultural significance, showing respect for water spirits.