Leave a comment Posted by Steve Martaindale on March 15, 2015 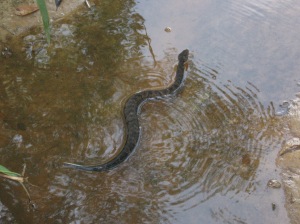 “The most difficult thing is the decision to act, the rest is merely tenacity.”

I came across these words from Amelia Earhart this morning. While I agree, there’s one other path worth mentioning.

Many and many a year ago, I was working at a very small newspaper, The Brenham Banner-Press in Central Texas, and picked up a lesson I’ve often applied in life. At that time, not many newspapers printed what was called process color, where color images are separated into cyan, magenta, yellow and black (CMYK). It involves running the sheet of paper through four different presses, each applying one of the colors.

The Banner-Press, at that time, had only four press units. Therefore, we could print only one sheet full color. At times, however, an advertiser would purchase an ad with “spot color,” in which the ad would be dressed up with blue or red in order to draw more attention.

Such ads were almost always placed on the back page, which gave us the opportunity to use a little color on the front page. Usually, the managing editor picked out an interesting item and had the guys in the pressroom place a light color screen over it, essentially putting the story in a colored box.

One time, that request was not made. Our publisher hated to waste the opportunity and, since the managing editor had already left for lunch, he decided to act.

Charles Moser pointed out five stories (our managing editor at that time subscribed to the theory of a high story count on the front page, so there were plenty to choose from) and told our cameraman, Alan, to apply blue screens. At least one of the stories had a dog-leg. That is to say it was not a rectangle.

Alan and I looked at each other; he only said, “OK.”

I made sure to be in the pressroom when the run started. Moser looked at the front page with five ugly blue fields on it and said, “Well, we won’t do that again.”

He was correct. This mistake would be wrapping fish and lining bird cages within a week, it would hurt nobody, but he learned that was one way to not use spot color.

So, yes, the most difficult thing is the decision to act. Tenacity is one admirable follow-up option; another is to toss it into the trash can and say, “Well, we won’t do that again.”