“You lost. Time to move on with your life.”

This advice was left by a person who follows my Facebook account. (You can, too, and I bet you can leave much more perceptive views.) His deeply insightful comment was to a link I shared to a New York Times article headlined “Our Articles on the Attacks Trump Says the Media Didn’t Cover.”

Perhaps the “you lost” part of his comment was because the usual set of trolls had already lined up. You know, those who bring up arguments as germane as, “This is crazy liberal dreaming because today is a day that ends in the letter Y.”

In his world, the fact that more people attacked it than supported it meant they won. Ah, if only right and wrong could be determined by a show of hands.

Then again, maybe he was saying I lost the election and should move on, as if that’s an original thought. We’ve already had that discussion.

But it’s the “time to move on with your life” portion of his input that really caught my eye.

He just doesn’t get it.

This is me moving on with my life.

It’s not something that has come easily. I have sweated it out – with no small amount of prayer and counseling – and wavered between whether I should resist what appears to be a forthcoming assault on all that is dear to me or withdraw into a dark space and spin my own stories of fiction.

It’s tempting to choose the latter. It would be easy to ignore the news online and on TV, to delete my news apps, to quit following the AP, CNN, Al Jazeera and others, and just let the country take care of itself. I could get up in the morning, re-enter the make-believe world of my books and write away.

But my heart and soul will not allow that.

Not while I see our nation taking the textbook steps into fascism. 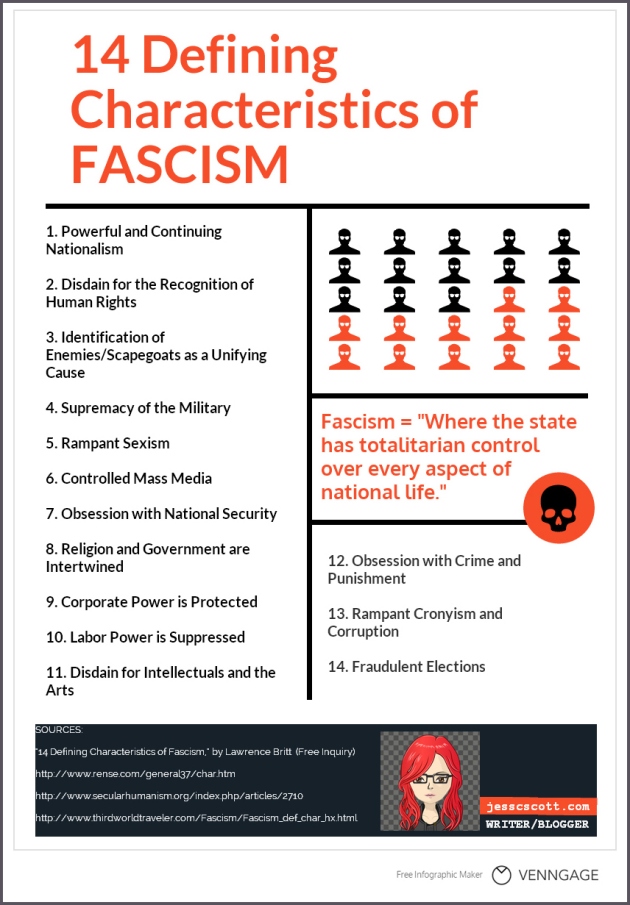 I have resisted until this very moment making a public comparison of our situation to the early days of Adolph Hitler’s ascent to power and all the ravages related to it.

Why? Because I kept wanting to believe such was an overreach. Surely, I thought, we will not allow such things to happen in this country. Hitler’s rise was documented well enough that we should recognize it if something similar begins occurring, right?

We can trust that someone will speak up and alert us … right?

But you know what convinced me that I must speak up?

No, it’s those who are dear to me who have called me names, who have blindly (I believe) fallen in line behind the march to an oppressive government, and who triumphantly trumpet their support for the current administration by repeating its lies and underscoring hatred.

Those saying things such as, “You lost. Time to move on with your life.”

I must soften Bertrand Russell’s assertion here just a bit. I do not believe only fools fall for a false, “energetic leader.”

Many have simply been fooled, deceived. They have locked onto an image of a country that they feel he has promised to deliver. With that image clouding their perception, they tend to overlook things, to forgive some of the things they do see. They fall victim to lies.

I do not believe my friends who disagree with me are fools. We just disagree.

However, if my fears of a rising despot prove to have any validity at all, I am honor bound to voice my concerns.

Since the election, I have visited a few times with a minister friend who, like me, is deeply troubled with the direction we’re headed. (By the way, at least three minister friends fit this description. They are also anxious to show that the Christian church is not entirely made up of what is being portrayed by the radical right.)

This minister is obviously better informed than I and considers events and implications at a deeper level, quoting the likes of theologians Karl Barth and Dietrich Bonhoeffer, the latter of whom was executed by the Nazis for his resistance to Hitler.

Even so, my friend is also struggling with what we can do besides contact representatives who have shown a deaf ear and the growing option of peaceful protest.

“And protest is OK,” I was told. “Our church was born out of protest. That’s why we’re called Protestants.”

I have another choice.

I write. It’s what I do. If indeed I have been called by God to speak my heart (Wouldn’t it be nice if He just sent an e-mail notification instead of us working to discern His wishes?), then I must write about it.

There you have it. I’m “moving on” with my life.

Finally, humility and common sense dictate I must consider the possibility I’ll be proven wrong. Of course, that’s probably part of what causes my hesitation, though certainly not as much as the unpleasant treatment I get from friends.

But should I be wrong, then hallelujah. I will gladly admit it and the lessons learned will better inform my future decisions and analyses. Possibly, other resisters and I might feel our campaigns helped steer the course of the current administration, but we’ll all be happy if everything is right in the world.

Along those lines, allow me to recommend an article I came across this morning by Nate Silver. Employing what he called “scenario planning,” he laid out 14 potential versions of how the Trump administration will play out. Certainly, there are more options, but anything else will likely resemble one or two of these, which range from plunging America into outright authoritarianism to making the nation great again.

Reading through them, I find a role in each for some type of resistance, such as my small contributions, whether it be to sound a warning or to influence a new direction.

So, don’t hate me for my part. I would also appreciate it if you don’t call me names, but that might be too difficult for some. Feel free to ignore me, but do hesitate to unfriend me if we’re really friends because I still have a life outside politics and enjoy sharing clever photos and stories.