I have a little secret to tell you about Mount Rushmore and it has nothing to do with Nick Cage.

Remember “Ventura Highway,” the song by America? It begins:

Chewing on a piece of grass

Walking down the road

Tell me, how long you gonna stay here Joe?

I thought of that song when I snapped the above photo of the memorial this morning following an overnight snow.

Nope, the boys don’t look good in snow. Or rain, for that matter. (PS, “the boys” is an affectionate term used by some here to refer to the four presidents carved from the mountain beginning 90 years ago.)

When you see them after snow or rain forms dark streaks down the carving, it makes sense. But one doesn’t think of that when making a long-planned, perhaps once-in-a-lifetime visit to the memorial.

It could be worse, however.

While the elevation isn’t particularly high – 6,025 feet at the top of the faces – the Black Hills can influence the weather and one way is covering the hilltops in low-lying clouds.

It’s not at all uncommon for clouds to cover the faces for hours and hours. Sometimes, one can see through the vapor and make out the images. Other times, it’s just a cloud.

Here are a couple of other photos I grabbed with my phone today.

Note about the Rocky Mountain goats. I was sitting in a vehicle in a parking spot. I say this because it seems most people get their Rushmore wildlife photos by stopping their vehicles in the middle of the road. 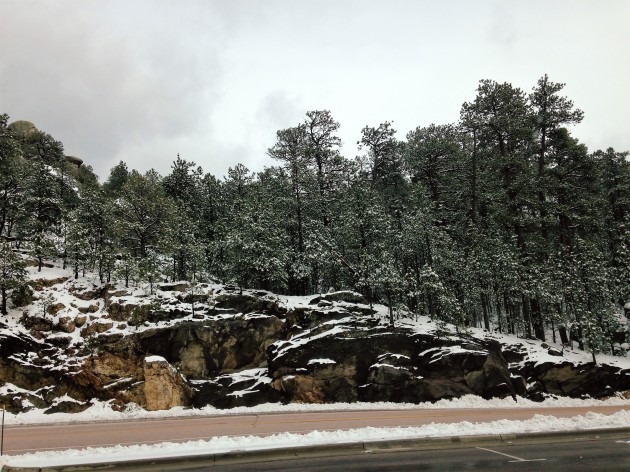 The photo of the cliff doesn’t do it justice. Trust me, it’s more awesome than it looks here.

One response to “Rushmore Highway?”