Raging at a tweetstorm 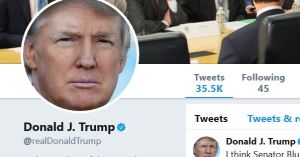 Apparently, if you believe some of the outstanding people with whom I work, I’ve been somewhat snarky all day.

Fair enough. It was my Friday and maybe I was a bit, shall we say, feisty.

I then came home and found a Trump tweetstorm and decided I would play along. Because this is my page and I can print what I want, here’s a rundown of me having a little fun with 45a, commenting on each of his 13 tweets (so far) today.

TRUMP: The failing @nytimes, which has made every wrong prediction about me including my big election win (apologized), is totally inept!

ME: Wrong, wrong, wrong. Listen, with your level of ineptitude, you really should be better at recognizing it.

TRUMP: The Trump base is far bigger & stronger than ever before (despite some phony Fake News polling). Look at rallies in Penn, Iowa, Ohio…….

ME: Rallies? This is a whole country, you know. Sorry (not sorry), but that rapidly shrinking support is real. Bottom line, you’re a loser.

ME: Again … stock market and jobs are still Obama’s. Border, military are smokescreens. As for Russian collusion … we’ll see. Yes, we will see.

TRUMP: … Supreme Court pick, economic enthusiasm, deregulation & so much more have driven the Trump base even closer together. Will never change!

ME: Still crowing that GOP stole nomination from Obama and you eked your pick through the GOP-controlled Senate? Yeah, you’re awesome.

ME, BONUS COMMENT: Close, eh? You might hope to have neighboring prison cells, but I doubt any of them will want to be on the same block with you.

TRUMP: Hard to believe that with 24/7 #Fake News on CNN, ABC, NBC, CBS, NYTIMES & WAPO, the Trump base is getting stronger!

ME: I know, you keep saying it and the Trumpers will believe it, but it’s still not the truth and the MSM are still 100x as honest as you.

ME: Hey, I don’t mind you taking vacations (though not with us supporting your businesses), but why invent another reason to lie to us?

TRUMP: Interesting to watch Senator Richard Blumenthal of Connecticut talking about hoax Russian collusion when he was a phony Vietnam con artist!

ME: Yeah, Blumenthal, take it from an authentic con artist. (PS – We’ll just wait for the investigation to finish.)

TRUMP: Never in U.S.history has anyone lied or defrauded voters like Senator Richard Blumenthal. He told stories about his Vietnam battles and….

ME: And you really think that makes it OK for you to make a deal with Russia to hack our elections and give you the presidency?

TRUMP: …conquests, how brave he was, and it was all a lie. He cried like a baby and begged for forgiveness like a child. Now he judges collusion?

ME: Thanks for that image. I can’t wait to see you cry.

TRUMP: On #PurpleHeartDay💜I thank all the brave men and women who have sacrificed in battle for this GREAT NATION! #USA

ME: Particularly those who served in your stead in Vietnam so you could protect your feet for future golf games.

TRUMP: The Fake News Media will not talk about the importance of the United Nations Security Council’s 15-0 vote in favor of sanctions on N. Korea!

ME: Oh, the American Free Press did report it. Perhaps you missed it while whining that China wouldn’t do the job for you.

TRUMP: How much longer will the failing nytimes, with its big losses and massive unfunded liability (and non-existent sources), remain in business?

ME: Probably for centuries, but definitely long enough to see you kicked out of 1600 Pennsylvania Ave.

TRUMP: I think Senator Blumenthal should take a nice long vacation in Vietnam, where he lied about his service, so he can at least say he was there

ME: You still haven’t figured out the last thing you need to do is attempt to call out someone for lying. Psst, folks call you Liar in Chief.

One response to “Raging at a tweetstorm”