Surely, with investigations mounting, with the Trump administration repeatedly going further off plumb, with the GOP increasingly alienating even its own … surely, the end times of this little experiment are approaching.

For the sake of the point I wish to make here, let us presume that to be true. Not that it really matters, but perhaps it will be easier to accept what I’m here to insist we need to do.

First, this is addressed to those who oppose the Trump presidency. That would include a broad range of people – far more than just Democrats or progressives – so I’m lumping us all under the term of the Resistance. Not novel, by any means, but it seems most accurate.

Warning: If you do not consider yourself among the Resistance, particularly if you remain in the midst of the dwindling number of Trump supporters, please read no further.

I will not be responsible for raising your blood pressure, especially since you and your leaders are so keen on pricing medical care out of your reach. Naturally, since I am not giving you permission to read further, neither will I allow comments making a weak attempt to defend President 45a* and the fact you wasted a vote on him.

What I want us to do is keep the message loud and clear but focused on facts.

Most notably, I hope we can eliminate the name-calling that is not representative of how we wish to see relationships carried out. All of us need to start working together to patch up the damage being done.

Do not challenge the intelligence of Trump supporters, for example. That puts them into a defensive mode and will make it take even longer for them to see their mistakes and/or how they were duped.

This does not mean that we back away from the facts that their health-care attempts were cruel or that most of their policies would achieve nothing but further enriching the upper-upper-crust billionaires. We must convey that message … but with compassion and support for personal growth and reform. 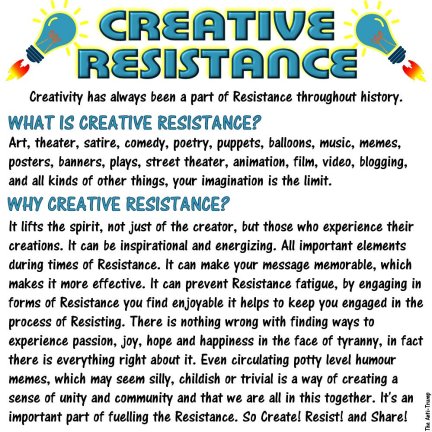 Certainly, we must do away with hateful comments that do not reflect on policy. An example is referring to Trump’s orange complexion. Or his hair. And definitely not his weight. Talk instead about his lack of a game plan. By the same token, quit calling Jeff Sessions an elf. What good is that when you can point out his racist background?

(As I was writing this, I came across the graphic on the right that talked about the use of creativity in a resistance movement. I’ve got to admit, the piece by The Anti-Trump makes a good case. But, as I mentioned in the opening, we will need to tone things down a bit once Trump’s term falls apart.)

A pillar in the Resistance is guaranteeing religious freedom for all religions and for those who desire to follow none.

However, because the radical right has warped its version of Christianity into an oppressive movement, many in the Resistance have become anti-Christian. That’s no better than what the right has done. Many progressives are Christian and they deserve the same protections as atheists, Muslims and others.

I could continue pounding out more examples, but you’re smart people. You get it. Be strong but be compassionate.

As much as possible.

* Oh, good, you followed the asterisk from “President 45a” … do you like that? What does it mean to you? The idea struck me while typing. I’ve seen a reference to Trump as 45* (similar to the movie “61*” and the suggestion that Roger Maris’s home run record would carry an asterisk because it was set in 162 games while Babe Ruth’s 60 homers were hit in a 154-game season). “Still,” some may say, “Trump will forever be our 45th president, even if he resigns after only six months.” Ah, but I’m hoping for more. I’m envisioning a storyline where his term is expunged and his replacement is known as 45. It’s a dream, for sure, but what if investigators prove Trump was in cahoots with Russia and that they did manage to throw the election? Surely, then, the entire election must be thrown out. Along with Trump and Pence, all his appointments should be summarily ousted. What happens next? The easiest thing would be to run down the order of succession, but in the above scenario it’s certainly believable that Paul Ryan and Orrin Hatch would also be caught up in the investigation and the entire Cabinet would be emptied because they were Trump appointees. Get it? So, the fairest thing would be for the Electoral College to reconvene and elect Hillary Clinton as president since, after all, the election was stolen from her. She could have the Oval Office up and running in short order. Another possibility would be to hold another election. Other countries call elections and hold them in a matter of weeks, but first things first.

Anyone who feels the need to drop something in my tip jar, maybe buy my next stout, may do so at paypal.me/SteveMartaindale but only after accepting my gratitude.

2 responses to “#Resist with compassion”